Teachers' Conference: What’s in a crystal? – A quantum universe

Carl Sagan is famous for saying that there are more stars in our Universe than there are grains of sand covering the world’s beaches. What Sagan didn’t say is that a single grain of sand has more electrons than stars in the Universe. What do these many electrons do in a crystal? They form a quantum universe.

In this conference, we will explore the confluence of recent exciting developments on this many-electron world in crystals. The topics to be discussed include:

• Why are electrons in fact waves that interfere with each other and, at the same time, particles that repel each other?

• How do the electron waves embody an abstract math concept called “topology”?

• How can the electron-electron repulsion create a variety of new quantum faces (phases)?

• Can some of these quantum phases have real-world impact and maybe even save the world?

This Teachers’ Conference, to be held in coordination with a week-long KITP conference entitled “Topology, Symmetry and Interactions in Crystals: Emerging Concepts and Unifying Themes,” will catalyze conversations on this prototype topic of quantum physics and how to bring it to the classrooms. 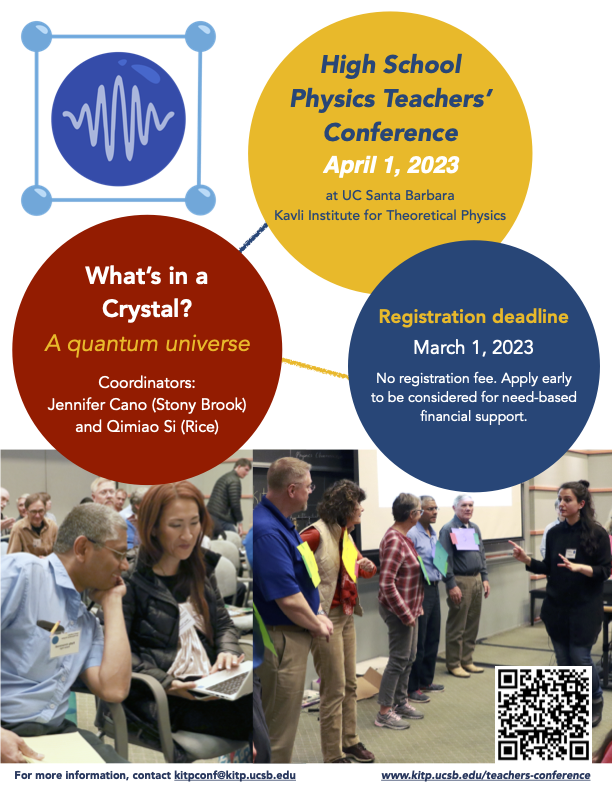 Financial aid for travel and lodging is awarded on a rolling basis.